The subject of my piece is the Masdevallia posadae, an epiphyte found in Colombia and Peru. I photographed this specimen one day while wandering through the UW Greenhouse with one of the UW Natural Science Illustration classes. I was struck by the beauty and boldness of such a little bud and thought it would make a fun piece.

The second layer depicts the blurry background foliage of the rest of the plant. It was painted digitally using Procreate. The background was then printed on glossy photo paper and rests behind the drafting film, adding another layer of dimension. I am new to working digitally, so I thought this would be a great exercise to replicate the photo background. One of the amazing features of Procreate is that it records all the strokes you make which can be played back as a video. I have included a link to watch the video below. Please forgive the speed of the video, I wanted it short enough so that people would watch it but it also jumps back and forth pretty rapidly at times and is kind of crazy.

I hope you enjoy my piece! 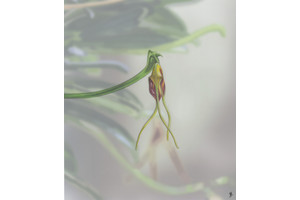