I mentioned in the last post that the sea otter depicted was one from the Seattle Aquarium. I reached out to them to find out which otter it was and they were able to give me an answer.

The Seattle Aquarium is currently home to five sea otters and Adaa is their male. Estimated to have been born in September 1999, Adaa was rescued from an airport runway in Alaska in early 2000. He received care and treatment, eventually finding his home in Seattle in 2004. Adaa, now 17 years old, has fathered multiple pups and appears to be enjoying life these days. 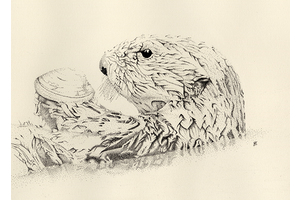